I don’t know what it’s been like in the rest of the world, but in Denver for the last few months it has been Tim Tebow mania.  He’s EVERYWHERE.  Sports news, regular news, billboards, and in daily conversation.  And boy is he polarizing.  You either love/worship him or you leave the room when his name is mentioned on Sports Center, which is every 2.9 seconds.  I will publicly admit right here and now to the 5 of you reading this that I was one of the latter.  This guy got under my skin so bad that I would LITERALLY leave the room if he came on the T.V.

Well the Bronco’s played in their first playoff game in some 5+ years last Sunday IN Denver.  Mayhem.   Jon found great tickets…so we went.  I’ll admit I didn’t want to go. My mindset went like this: It’s a little chilly out, I have errands to run, but more importantly – WHO CARES about the Broncos!   Well my husband was nearly bouncing off the walls with the prospect of attending an NFL playoff game, so vying for that wife of the year award, I slapped on a mildly amused facial expression and we left!  We decided (after months of suffering through the incredibly annoying Tebow mania) that we were going to support the Broncos and just have a good time.  After arriving at the stadium an hour early and sitting on the edge of our seats through the whole game, right to the end of the quickest playoff overtime in NFL history to give Tim Tebow, and the Broncos, a win like I have never seen…I have one thing to say.

It was the most fun I have ever had at a sporting event.  Ever.

The stadium was absolutely vibrating with excitement for every. single. second. of the game.  It was contagious and we couldn’t help but get swept up!  Now I will ALWAYS be a Vikings fan (unfortunately) but since they’re out of the running this year – GO BRONCOS!  This all comes up because today the Broncos play Tom Brady (sigh) and the Patriots at New England.  Normally I would tell the Bronco’s “goooooooood luck suckers”!   But after what I witnessed last weekend I wouldn’t be surprised by anything. 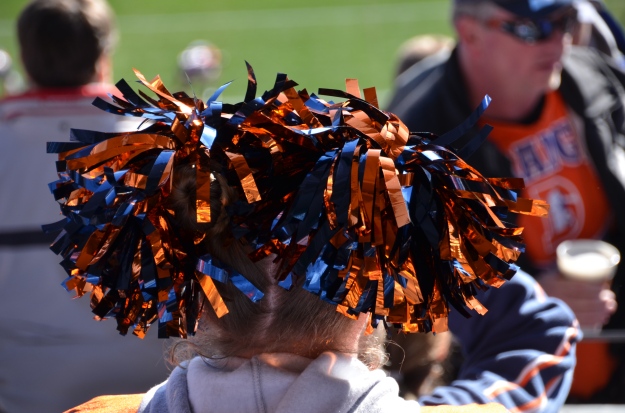 As I sit here and write this, the what have become comforting voices of Sports Center are dissecting the games that haven’t even happened yet, as usual.  The difference is, when they talk about the Bronco’s, the dissecting ceases a bit and they all just throw their hands up.  Nobody knows what the hell is going to happen and each one of them at some point over the season has had to eat crow for Tebow bashing.  Case in point, here’s a quote I literally just heard from Ditka when asking for his pick:

The logical pick is the Patriots.  Why?  Because Tebow is truly a terrible quarterback stats wise.  He’s painful to watch at times.  Yet, he’s gotten his team into round 2 of the playoffs.  It’s crazy.  Some call it divine intervention from the God he preaches to after each and every game, but I call it incredible luck and great karma. Whatever it is, it’s a blast to watch and if you have time today I suggest you tune in. 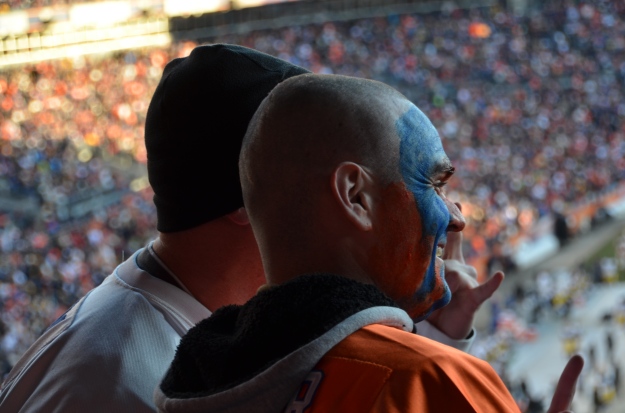 and then there were super fans.

There were TWO mascots,

but there were FOUR parachuters.

There were beautiful balloons,

and there were beautiful cheerleaders. 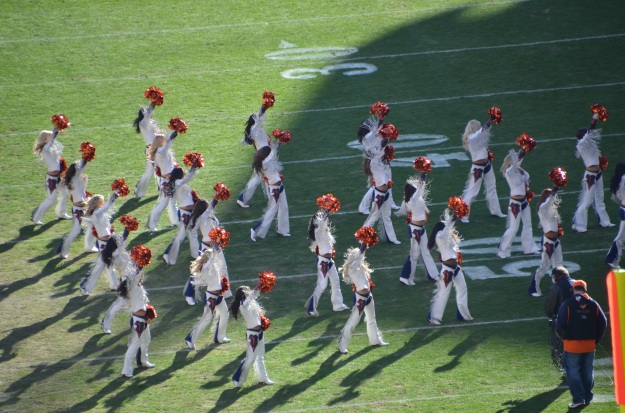 There was fire in the sky, 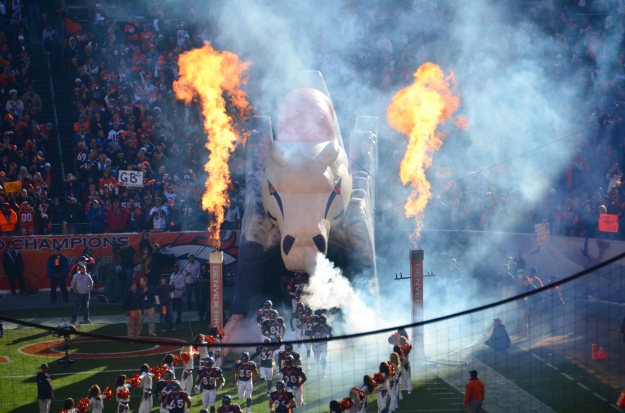 but even better there were planes in the sky. 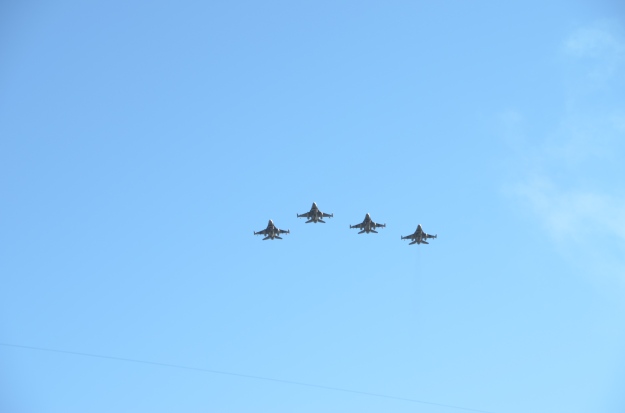 There was a horse on the stadium,

which is not to be confused with a girl on a horse.

And of course there was Tebow,

who is not to be confused with Tebowing.

So…when the Broncos take the field today I will be sporting some home team pride.  For last Sunday, Tim Tebow got out from under my skin, and stole a little (tiny) piece of my heart.

For those of you still on the negative side of the polarization, please see this article.  Tim Tebow might be a little annoying and he might preach about God too much for some, but I believe he’s a really great guy all football aside.  I watched him with his fans on Sunday and I’ve never seen anything like it.