Sorry for the short break in the action but we had some major things happening around here this past weekend.  Denver had it’s version of a ‘blizzard’ which essentially means that it snows, everybody freaks out, schools and businesses shut down, and everyone from Minnesota laughs.  Out loud.  While pointing.

Denver wouldn’t know what a blizzard looked like if one black iced its ass into a ditch.

So an entire metropolitan city shut down starting Thursday night and didn’t really re-open until Monday.  They cancelled schools and closed offices Thursday afternoon before a single drop of snow fell because of predictions (apocalypse).

Yes it snowed, and yes it snowed more than an inch.  However, the problem in Denver isn’t the amount of snow, it’s that THEY DON’T PLOW.  Ever.  Not at all.  I’ll give the Minnesota readers a moment for that to sink in.

It’s Tuesday afternoon and they STILL haven’t plowed any side streets which are now like driving through a sugar beet field.

So when Jon and I awoke Friday morning expecting six feet of powdery goodness forcing us to stay inside, we were instead greeted with sunshine and about 7 inches of rapidly melting wet fluffy snow.  Damnit.

Thanks to Jon and his hatred of all things lazy, we took full advantage of a day off  and ran errands.  Ran errands where we could because random businesses were just simply closed.  Because it snowed a little.  ANYWAYS – onward to my point here.   One of these errands included FINALLY buying a new mattress!!!  This is where my complaining of not being permitted to be lazy will end.

I can’t even begin to explain how happy I am about this.  We have been agonizing over this decision since before we got married.  The only thing we could decide on was the size…KING (duh).  People have warned that king size beds are a marriage ruiner.  You know what else is a marriage ruiner?  Sleeping like a plank on the edge of a sunken queen while glaring at your husband who is comatose and impersonating a starfish.  The promise of a king has been the only thing keeping me from stuffing a dirty sock in his wide open sound asleep mouth.

It was delivered Sunday and we’ve BOTH had two nights of blissful comatose starfish impersonating sleep.

I will say that I’m not sure yet if it’s because of the Temper-Pedic.  We could have bought a water bed and it would have been an improvement over the catastrophe we’d been sleeping on.  In fact, our entire room was sad and pathetic and un-relaxing.  I’m sure like the cooking post I will regret this, but with embarrassment…here it is: 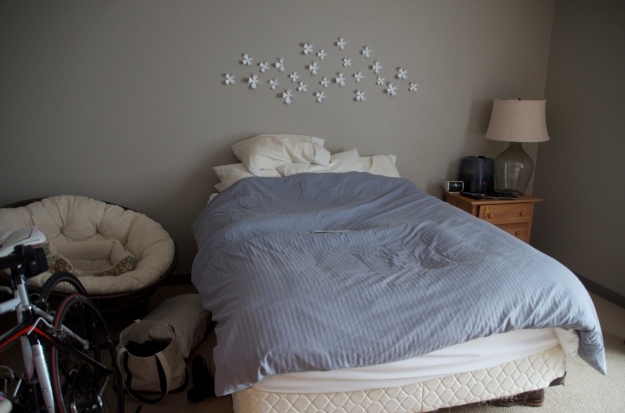 Hahahaha.  Oh my god it’s so much more horrible here.  To answer your certain to be asked questions, yes we sleep near our bikes (Jon doesn’t want his stolen), yes we do sometimes become depressed when standing in there, and the mattress bottom is all torn up because our cat/dog prefers to torture during sleeping hours.

The shame I now feel is only motivating me to complete our re-decoration more.

Sunday morning I went crazy and emptied EVERYTHING out of there to prepare for our new arrival.  It is currently sitting on a pristinely vacuumed floor because much like the mattress choice, choosing a bed frame has been agonizing.  I kicked all the other crap out of the room because it didn’t deserve to be in the presence of such magnificence.  I hastily piled on the new/unopened king size sheets, blankets, and duvet that have been sitting in my closet for months waiting and collecting dust.  The change is indescribable.

Jon asked me this morning after he had gone to work if I was already excited to go to sleep again.  My answer was yes and I hadn’t even peeled myself out of the bed yet.  The next step will be the bed frame, followed little by little with more changes such a less depressing paint color, some new bedside tables, a home for our bikes and some pretty pillows.  Until then I plan to continue sleeping like the dead and perpetuate Jon’s fear of all things lazy.