Remember those emotional anxiety symptoms I was having? Well, I couldn’t seem to shake them. As a matter of fact, they got worse. I actually found myself lying awake in the middle of the night a few times which is like adding insult to injury for a new mom. The lack of sleep only intensified my anxiety over the next couple of days. Finally, at around 4:30 a.m. one night, it dawned on me that a few specific things over the last week had really exacerbated my fears about the future and Leo’s health, happiness and general well being. Once I identified where this pent up angst was coming from my brain was able to better make sense of it all.

A blogger that I have followed for almost ten years, who now has a two year old little girl, posted about she herself having a troubling few weeks. She credited the majority of her ‘funk’ to a life long friend of her daughter (and little boy) suddenly passing away in his sleep. The thought of that happening to ANYONE, let alone Leo, is unequivocally unbearable for me to even think about. That is one thing all parents worry about and lose sleep over from the first day they bring their baby home and the fact that it actually happens to people is tough to take. I think I was in such shock to read that story on this ‘happy little blog’ I have read every day for the past 10 years that I didn’t fully process how deeply upsetting it was to me.

Another thing that happened was a colleague of Jon’s passed away. He was traveling in Europe with his wife over 6 months ago when he suddenly collapsed. He was hospitalized overseas (away from his friends and family) for many, many weeks and then finally brought home to then months later be declared brain dead. Recently, his family made the impossible choice to remove him from life support. The thought of his children, what his wife has gone through these last six months, and the fact that he had the best of his life ahead of him is just…it’s horrible.

Both of these incidents are things you think will never happen to you, could never happen to you. But they happen to people all the time and it is so, so scary. I said in my last post that it’s not all gloom and doom over here, that I’m not as paralyzed in fear as it seems, and that remains true.  I just find that it helps me to process and sort through things by writing them down and also feel that I can’t be the only one who thinks about this stuff.

All of this emotional baggage was brought to a head by a completely random night of movie viewing. I simply do not have the time or the energy to watch movies these days, but for some reason I was overcome with the desire to see the film Lion. I took Leo to three different RedBox locations before I was able to procure the DVD. That doesn’t sound like a ton of effort, but I assure you that with a three month old, it is. Once Leo was asleep I started the movie and from the opening scene until the final credits I sobbed.  I didn’t get teary, I didn’t just sniffle, I ugly cried my way through the entire thing. I already knew the true story that the movie was based on but even so, I just completely unraveled. I had to shut it off half way through and take a break because I was such a mess.

The story is about a little boy that gets separated from his family, essentially lost, and the journey that his life takes after. I couldn’t decide who I was crying for the most; the boy, his birth mother, his brother, his adopted parents…you could find reasons to empathize with them all. The mothers were an obvious place for my heart to go, but I kept going back to the little boy and putting Leo in his place. It was excruciating to imagine. The film ended with a final gut punch as they said the little boy had been pronouncing his own name wrong, mistakenly saying it was Saroo instead of Sharu, which in Hindu means Lion. Leo’s name means the same and we often refer to him as Leo the Lion. I immediately went into his room, WOKE HIM UP from a nap like a certified crazy person, and held him and cried for about ten minutes.  I told you, I was a total mess (but seriously, the movie is really good and don’t let my intense reaction to it scare you away).

The moral of the story is, the movie was tough to get through but it was also cathartic as it allowed me to release all the feelings I’d been keeping locked up for sake of putting on a happy face for my family. It was in thinking about all of these things that I was able to realize, truly, how much my husband and little boy mean to me and that it is a bit scary to admit HOW much. It’s like when we were trying to get pregnant, I didn’t want to admit how much I wanted it because then I would have to admit how sad I was if it didn’t happen. Or why it was tough for me to be unabashedly happy when I did get pregnant, because if it didn’t work out, if something went wrong, I would have to admit how devastated I was. I was protecting myself. And now, with Jon and Leo, if I really allow myself to fall as in love with my new family as I am, I have to not only wear my heart on my sleeve but have it walk around outside my body in the scary world every day.

I found this quote yesterday which could not have been more perfect or come at a better time.

No one ever told me how much fear is hidden in love.

So yes, it may seem that I have a few irrational fears right now, but just remember that I’m new to this mommy gig and having my heart triple in size overnight takes some getting used to. Going forward, the trick for me will be to just embrace the fears because at the end of the day the fears are there because of all the love that’s there too. 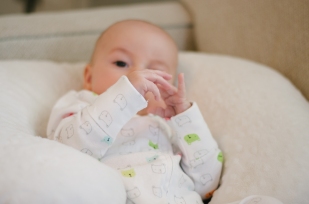 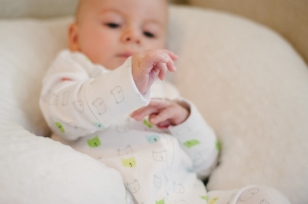 3 thoughts on “Embracing my fears.”