When it comes to music, I’ve always been a lyrics kind of girl. It’s not that I’m NOT an instrumental kind of girl (hello, I love DMB) or the kind of person that can’t just appreciate the ‘feel’ of a song. I can, and I do. HOWEVER, my heart belongs to the words. If, as a musician, you are able to combine all of the above I will crumble into a puddle of love for you.

A few nights ago Jon and I were discussing concerts we’d been to (which as it turns out is A LOT) and which were our favorites and why.  For example, my favorite vocal experience is Ray LaMontagne (before he hit it big) at the Ellie Caulkins Opera House in Denver.  It was him, alone on a stage with a spotlight and a guitar, hiding behind nothing.  It was ABSOLUTELY breathtaking, magical and gut wrenching. Favorite ‘band at a bar’ experience was Shovels and Rope at the Ogden Theatre.  I argued that show might be the best show by a band I’ve ever seen. Electric is the only word to describe it. My favorite concert ‘memory’ has to be Jon and I watching Dave Matthews play on the beach in Hawaii with Tim Reynolds. Once in a lifetime.

But, when it comes to combining ‘all of the things‘…one show stands out.

Four years ago, my mom and aunt were in Denver for a visit. Their visit ‘wish list’ included a concert at Red Rocks (if you live under said rock, it happens to be the greatest music venue in the world). I needed to make it happen for them. One of the concerts while they were here was The Avett Brothers. This ended up being SO perfect as it fell on a weekend, we were able to get a group to go, and they are one of my brother Greyson’s favorite bands and I had wanted to see them forever. They had a world class opener (Shovels and Rope) and everyone was so pumped.

It’s interesting because for the first time, I went in with zero expectations.  We were ‘only’ going because my mom and aunt wanted to see a show and this was the option that weekend. To say our expectations were exceeded is an understatement. Shovels and Rope (see above) opened the show and they were awesome. Jon and I already wanted to see them again before they even finished their set. Then came The Avett Brothers. Their gratefulness to be playing Red Rocks, the excited fans, their energy, and be still my heart…the lyrics. They combined ‘all of the things’ and I did turn into a puddle, brought to actual tears by the lyrics in a song called Offering.

To me it’s perfect
Just wanna do you right

Nothing spectacular about the song, but we were in the early stages of our fertility battle and my heart had temporarily set up shop in my throat. We were realizing that our dream of having a baby was going to be much more difficult to actualize than we ever imagined and I was pretty heartbroken about it. I’ll never forget hearing it for the first time. That concert experience solidified the The Avett Brothers as one of my favorite bands to see live, and we do, every chance we get.

They usually come to Denver on or around the 4th of July and we had planned to go this year with some good friends of ours.  It was going to be a big night for us, our first night out leaving Leo with a sitter. He would be just shy of 6 months old and I was ready. Ready for some independence, ready to reassure myself I could still be who I used to be, ready for a night out with my husband at one of our favorite places in the world seeing one of our favorite bands. I was ready for that full circle experience and so hoped they would play Offering and I would maybe be brought to tears again, but this time with my heart back in my chest and full of gratitude.

Well, Leo had other plans.

This has all just been a long winded way of getting to the point of this post.  I have sung Leo’s praises in these posts for months now, and I still do, but boy…month 6 was without a doubt the toughest.  All at once he had a MASSIVE sleep regression, going from waking only once a night, nursing, and going back to sleep until morning to waking every 1.5 to 2 hours ALL…NIGHT…LONG. He also insisted on sleeping with me in bed and I am not a co-sleep kind of girl.  Then on top of that, out of the blue, he refused to take a bottle.

Needless to say we did not/could not go to the concert.

It was tougher on me than I was willing to admit at the time due to my sleep deprived stupor and the fact that he’s never really been too demanding and I knew this was part of the deal of parenting. We just sold the tickets and moved on. We finally got the sleep issue under control THANK GOD, but the little stinker just would not take a bottle. Not from my mom, not from Jon, not from anybody. If the baby only eats from momma then momma has to stay put.  Therefore, I could not attend my best friend’s bachelorette party in Park City and I…was…crushed.

I remember sitting looking at him while he was nursing and I felt like I was going to have a panic attack. It really sunk in that if he wouldn’t take a bottle I could never be away from him for more than three hours. That’s tough to understand if you haven’t been there, but (excuse my french) it feels fucking intense.

Leo has been such an easy baby that I knew we were due for some adversity around here. I definitely snapped at Jon in the middle of the night a few times, and had a sobbing meltdown over missing the bachelorette party, but other than that I was proud of how he and I navigated through those few tough weeks (which felt like months). It was also eye opening to realize just how hard it’s going to be for us going forward having isolated ourselves from family by living in Denver.  ‘We’re an island’ I like to say.

I’m not sure how to end this post other than to say I did find a silver lining in missing the concert. I was able to reflect on just how much Jon and I got to do and experience in the 4+ years we waited for Leo that would have been much more difficult (if not impossible) with a baby.  I’m grateful for that time with him and the living we did in those years.

Anyway, soon enough we’ll be back in action going to concerts and on trips…right?!?!

Here are some photos of Leo on his 6 month birthday, July 10th. 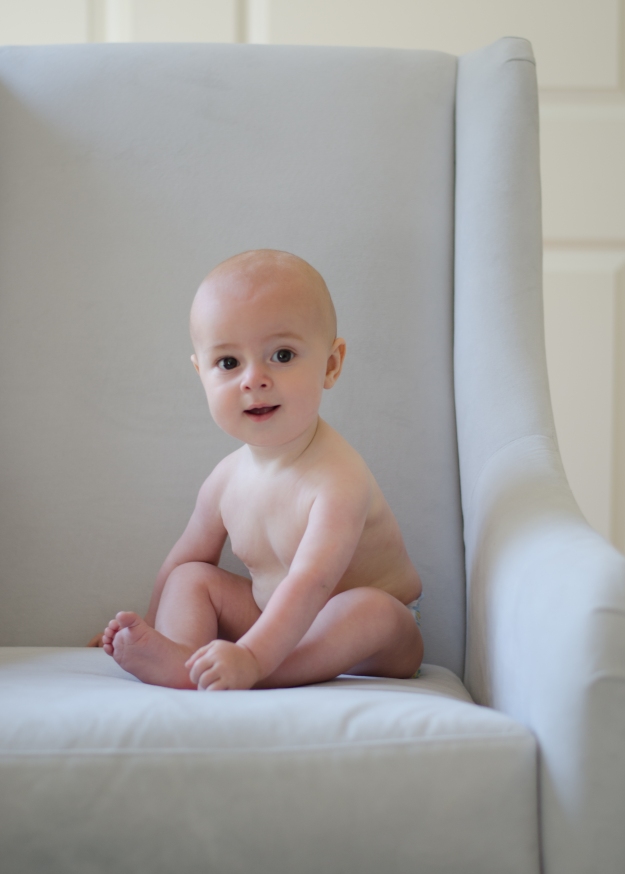 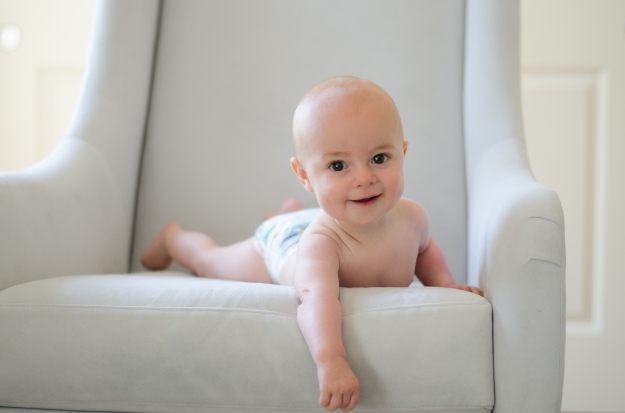 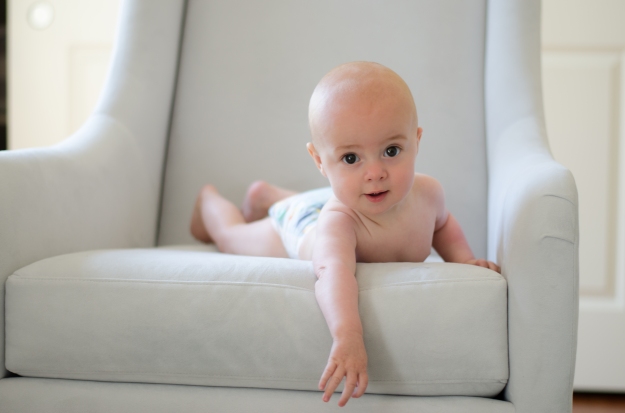 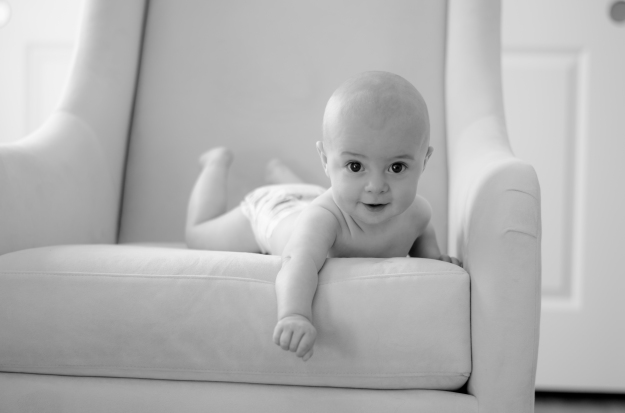 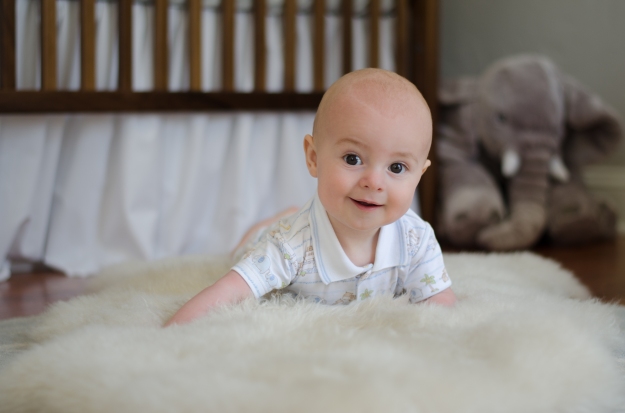 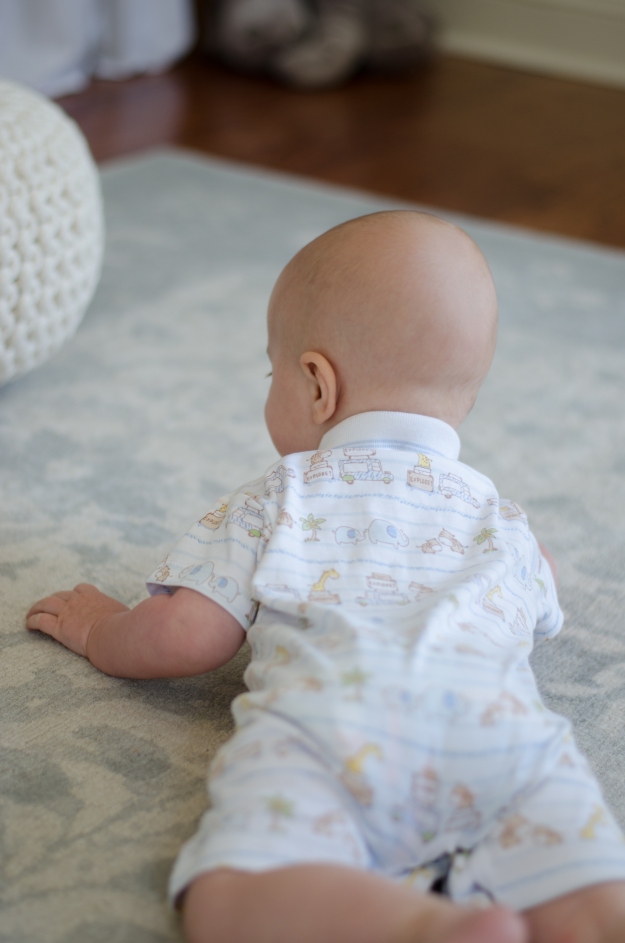 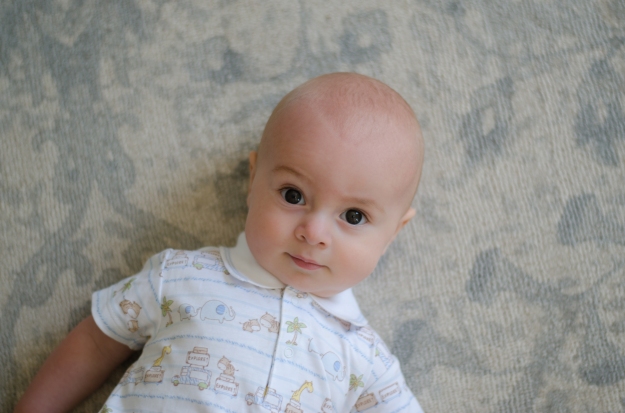 He looks like such a little geek in this collar.  : ) 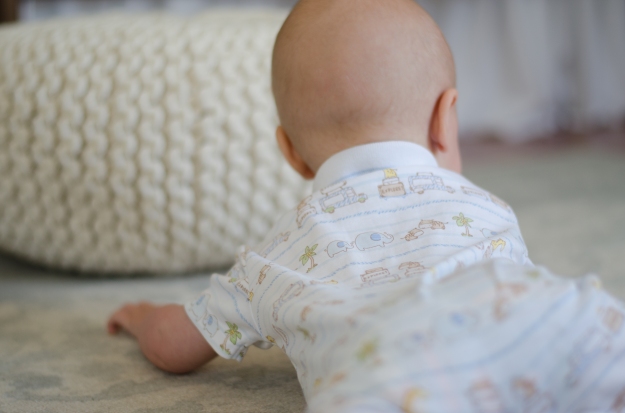 I love the little animal details on this outfit! 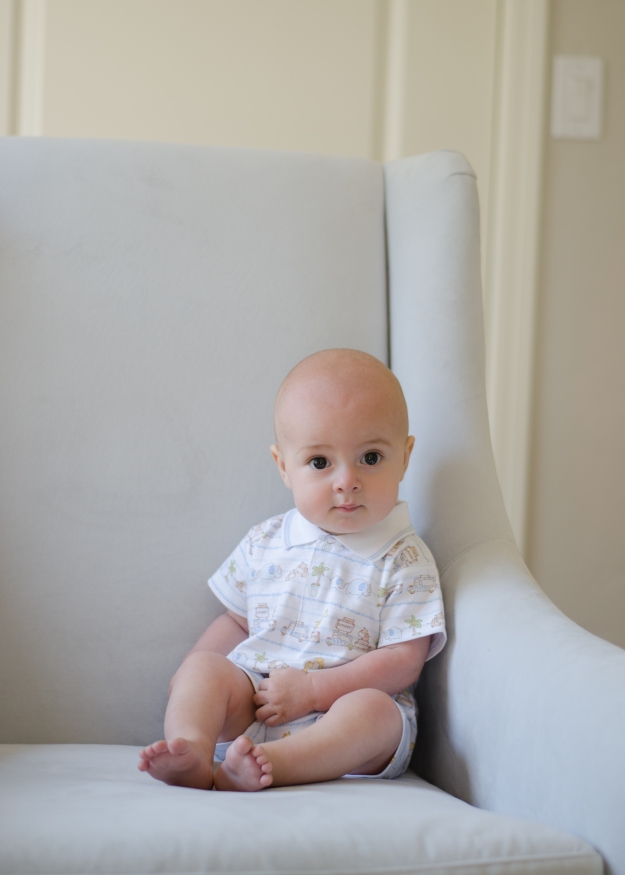 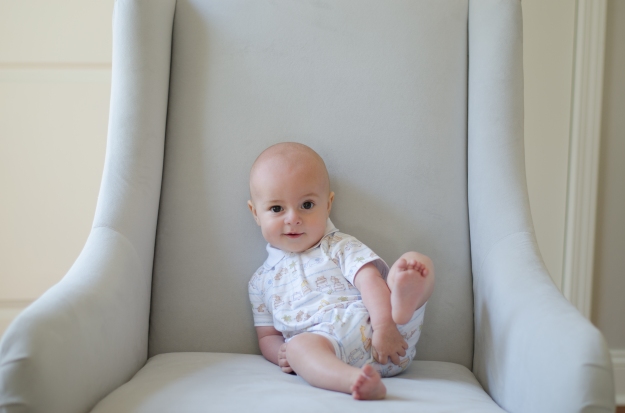 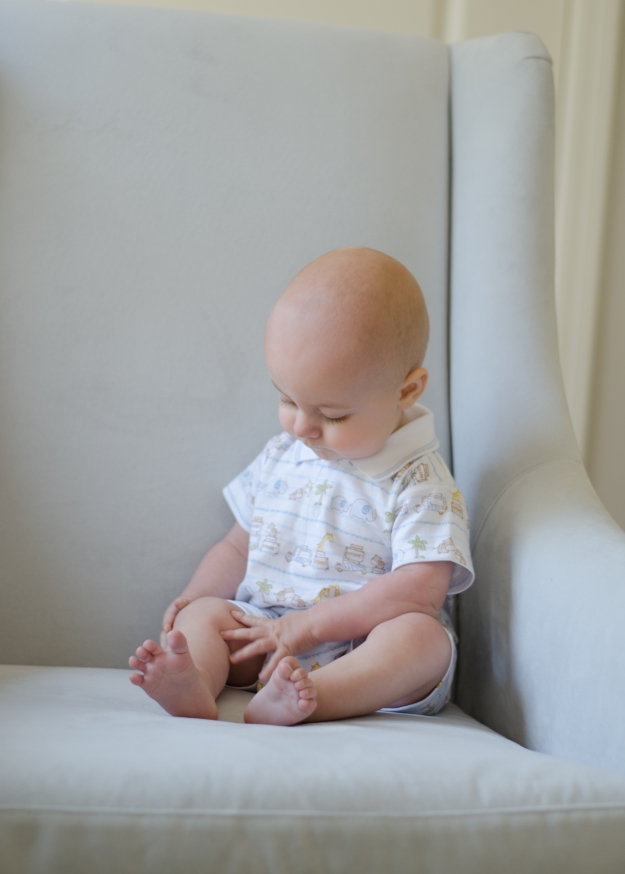 Hardest thing about month 6 were the three weeks of sleep deprivation.  Brutal.

Easiest thing about month 6 was sleep training, once we decided to do it. It was amazing and we should have done it sooner. 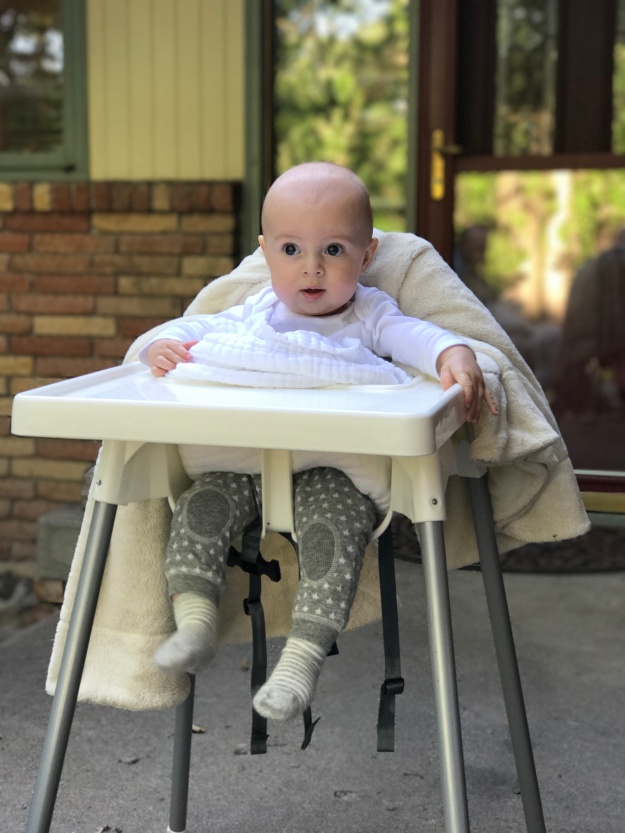 Worst thing that happened month 6 was, as stated above, missing Erin’s bachelorette party.

Best thing that happened was taking Leo to Ada and Pelican Lake for the 1st time.  Post to come on that. 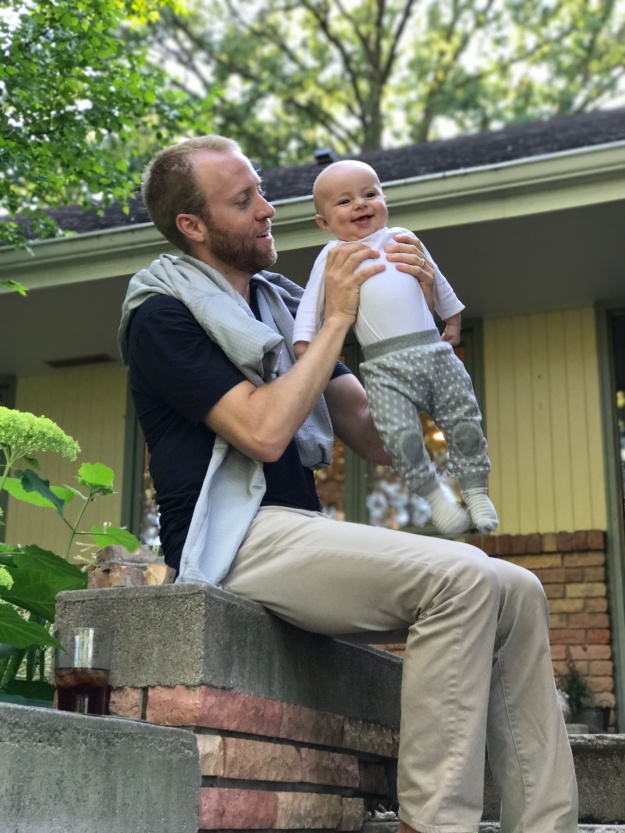 Most unexpected thing was his eagerness to start solids and all the teeth popping through.

Most loved baby item is his adorable teether from my friend Emily.  It’s currently his favorite toy and has been a life saver during teething.  The brand is SweeTooth. 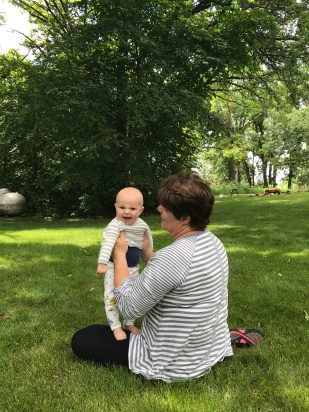 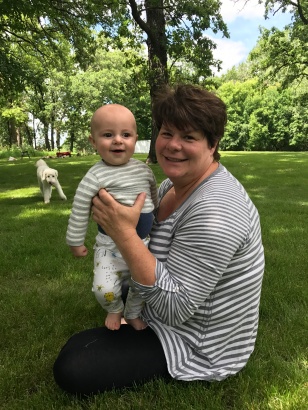 Funniest thing that happened was his first interaction with a dog in our front yard who’s name turned out to be…Leo!

Milestones: most notable is getting teeth and starting solids!

Favorite memory (though I have a million) I’ll say was having Auntie Erin and Stanley in town. 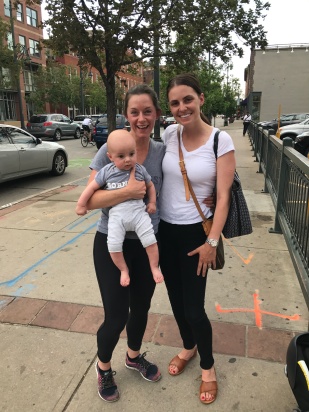 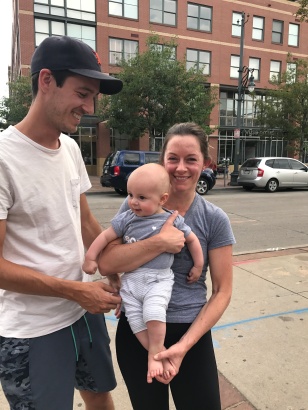 Favorite outfit…must be the hat. 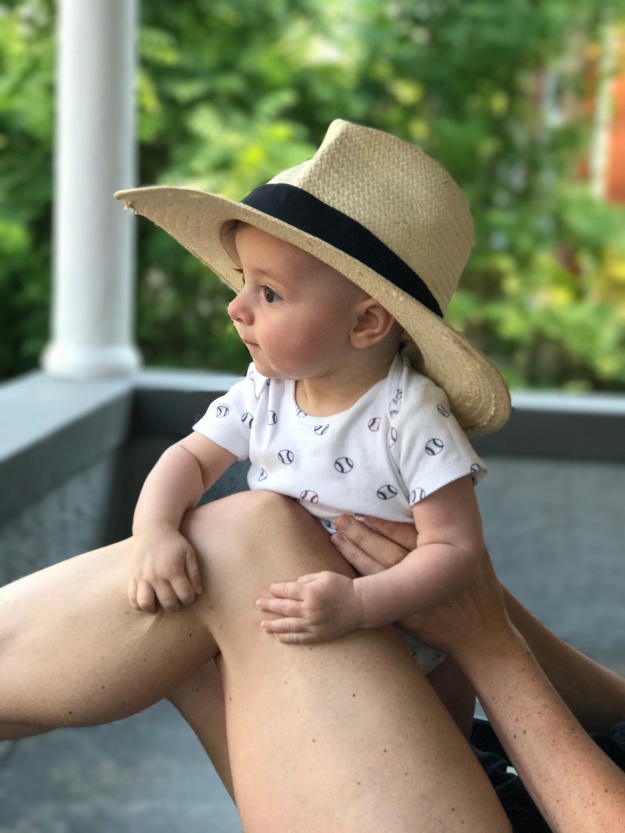 Favorite photo…because I actually made it into one! 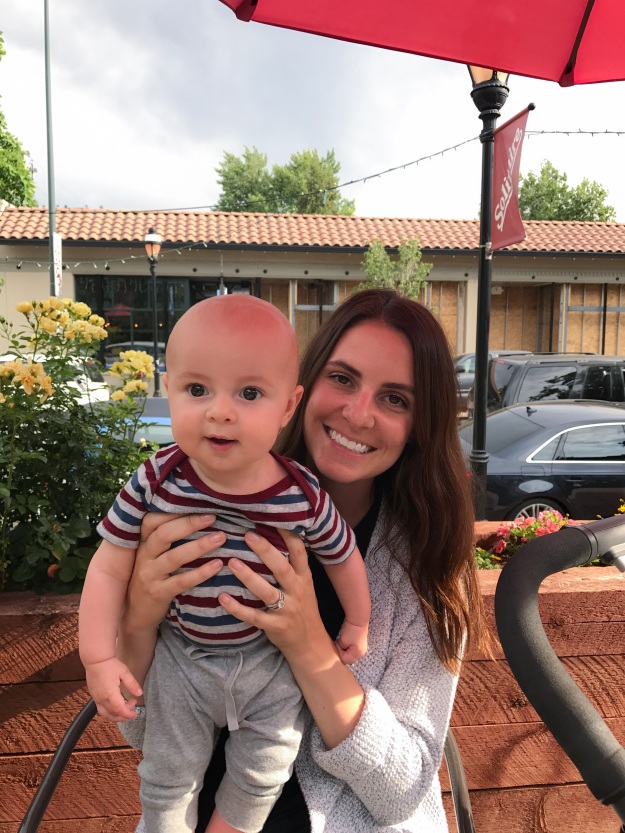 Funniest photo…from when he blew out his diaper and all I had were these pants.  LOL. 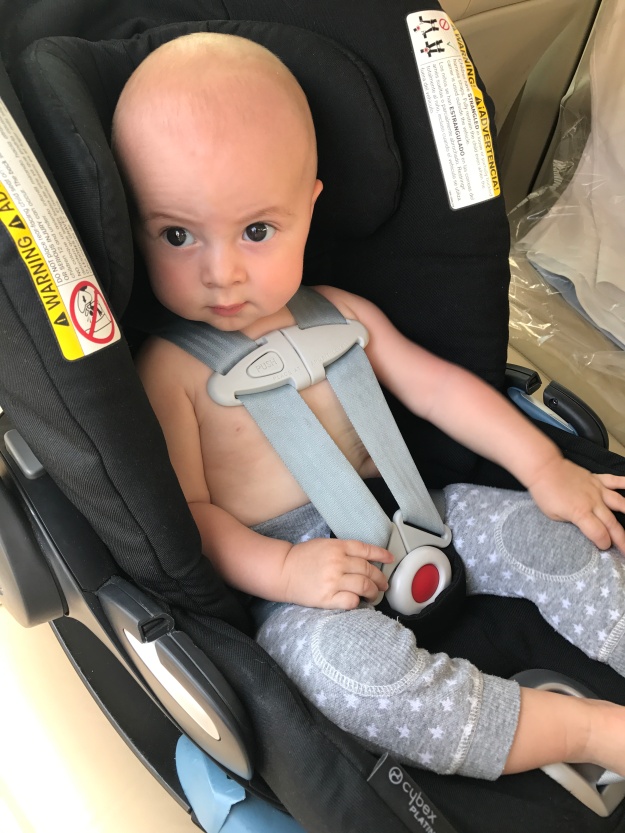